This year’s virtual conference included 27 panels, 135 panelists, two distinguished keynote speakers, and two High-Level Plenary Panels. The Weekend offered a broad array of both public international law and private international law topics, such as Standard Setting for Outer Space Activities, Novel Human Rights Crises During a Global Pandemic, and Trends and Challenges in the Enforcement of International Arbitral Awards. Eleven panels—ranging from private and public international law topics including The Challenge of Globalizing Private International Law and On Being a Lawyer-Diplomat—were designated for continuing legal education (CLE) credit, available for registrants in New York and California. CLE Credit was made possible through the sponsorship and assistance of White & Case LLP.

The conference opened  Thursday afternoon with the President’s Opening Plenary Panel on International Law in Challenging Times. ABILA’s President, Professor Leila Nadya Sadat, moderated a discussion between H.E. Judge Silvia Fernández de Gurmendi of the International Criminal Court (ICC), Professor Gian Luca Burci of the Graduate Institute of International and Development Studies of Geneva, and Professor, and former Ambassador David Scheffer of the Northwestern Pritzker School of Law. The panelists spoke of the challenges within institutions they had been closely associated with, especially the World Health Organization (WHO) and the ICC. They also discussed the need for reform as well as cooperation in order not only to “change the world,” but in the view of Ambassador Scheffer, to “save the world” from the many pressing challenges it faces.

On Friday afternoon, Catherine Amirfar, President of the American Society of International Law and Partner & Co-Chair of the Public International Law Group at Debevoise and Plimpton, LLP, delivered a keynote address on “The Making (and Unmaking) of the International Rule of Law.” She noted the importance of international law in a complex world, and urged a return to bipartisan support for it in U.S. politics.

H.E. Judge Julia Sebutinde of the International Court of Justice opened the Saturday morning program with a keynote address illustrating that the Court “is capable of handling the most challenging issues of today and tomorrow,” including nuclear weaponry, cybersecurity, decolonization, and more. “Countries all over the world place their confidence in the Court to resolve their disputes,” she said. “In these challenging times, the Court’s enduring offer of peace through law is as important as ever.” Judge Sebutinde noted that despite the wide range of global challenges facing international law, she sees a path forward. “I do not see only challenges. I also see promise,” she stated. “Our responses to all of the new challenges we face, and the old ones, must be informed by the ever-evolving rules of international law that have brought so much peace and prosperity over the 75-year history of the United Nations.”

In addition to the panels and speaking events, ILW 2020 hosted networking rooms by 14 ABILA committees, and three community networking rooms for Women and International Law, Minorities and International Law, and Young Lawyers. The virtual platform allowed individuals the opportunity to meet and converse with other participants from around the world. The conference drew scores of participants from dozens of countries.

The International Law Students Association organized a Career Networking Session for students, who attended ILW in large numbers this year from law schools around the globe. Brill Nijhoff also sponsored the conference and hosted a drop-in room for attendees, with a virtual exhibition room of its many international law titles for registrants to peruse.

Next year ILW 2021 will be (hopefully) held, in person, at Fordham Law School and the New York City Bar Association from October 28-30.  Mark your calendars now! 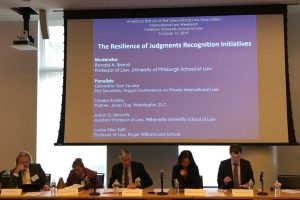 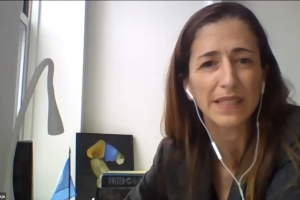 During Spring 2020, the American Branch of the International Law[...]